Decentralized apps (DApp) continue to be a major focus point for developers in the crypto space. However, 2019 ended with DApps still far off from reaching their much-touted potential of being the “future of the internet.”

DApp projects in 2019 continued to suffer from their usual issues like poor user retention and the difficulties of navigating user interfaces (UI), among others. While some projects boast market capitalizations north of $100 million, they fail to attract more than a handful of daily users.

In the early weeks of 2020, some analytics firms dedicated to monitoring the DApp ecosystem have released reports summarizing the performances of DApp developers and projects in 2019. These reports paint a similar picture for the decentralized apps ecosystem with significant increases in on-chain transactions and new projects without any corresponding improvement in user statistics.

Also troubling is the trend of the high DApp turnover rate with as many new projects appearing as those being decommissioned. While such trends might appear common for nascent technologies, DApps will require some staying power to present themselves as viable applications of the emerging blockchain narrative.

However, the 2019 DApp market performance did throw up some positives with decentralized finance (DeFi)-focused platforms and non-fungible tokens (NFT) rising to some prominence within the broader ecosystem.

As previously reported by Cointelegraph, both DApp aggregator DappReview and DApp analytics platform Dapps.com have published detailed reviews of the performance of decentralized apps in 2019. The following is a summary roundup of the information gleaned from both reports.

Figures from Dapp.com show that more than 1,300 DApps were abandoned in 2019. According to the analytics platform, an abandoned DApp is one with no transactions occurring within 30 days.

Despite Ethereum leading the way in several categories, the EIDOS launch in November 2019 skewed the results of Dapp.com’s market report, with EOS accounting for the largest transaction count and volume. Transactions on the EOS blockchain dwarfed all other DApp platforms put together.

Setting the EIDOS figures aside, the number of active users of EOS DApps declined during 2019. Before its launch, EOS boasted the highest number of daily active users, however, the EIDOS launch saw its average user statistics fall by about 80% from 80,000 per day to 15,000 users per day. The drop in EOS user stats meant TRON became the second-largest DApp platform behind Ethereum.

User retention remains one of the major problems for DApp platforms. An excerpt from the Dapp.com 2019 report reads:

For mainstream centralized apps, the existing reality is that users never have to pay for computation. If the app requires a data connection, as long as customers have an active internet subscription, they can make use of the application.

For Ethereum-based DApps, the situation is different with developers not covering gas fees, pushing that cost to the end-user. Gas on the Ethereum network refers to the unit of measure used up to execute a transaction on the blockchain. During periods of high network stress caused by such congestions, these costs can become impractical for DApp users causing a significant outflow.

One probable solution to this issue is the use of DApp sidechains — DAppChains. Instead of running DApps on the main blockchain, decentralized apps can be executed on layer 2 protocols, which can provide efficiency and cost-saving advantages.

Alternatively, DApp creators can move the more computationally heavy activities to layer 2 platforms, leaving only smart contract updating protocols on the main chain. By doing so, only a hash of the DApp data is kept on the main blockchain with the bulk of the work happening on DAppChains.

Such protocols are already being employed by developers of gaming DApps. These hybrid-blockchain games have their core decentralized token economy residing within the main blockchain, while game assets that take up the main bulk of the computing potential are domiciled on sidechains.

“[The] largest problem is the challenge of providing true value to the users (look at apps that you use in your daily life and why you stay there) beyond monetary incentives that are often only possible for a limited time. Additionally, the users still have too often maneuver through a complex setup regarding their wallet and key management.”

Ease of use hampering mainstream adoption for DApps

Ease of use is thus a major issue that negatively affects user retention for DApps. Taking exchanges as examples, centralized platforms still see more users than their decentralized counterparts owing largely to the difficulty in navigating decentralized exchange (DEX) services.

The issues surrounding the ease of use not only affect user retention but also constitutes a roadblock to bringing DApps to the masses. DApp developers need to design user interfaces that do not contain unfamiliar and sometimes technical features, thereby making the learning curve for their programs even steeper than necessary.

DApps and web3 programs, in general, also have compatibility issues with smartphones whose browsers account for the greater percentage of web traffic. Unlike for desktops, smartphone browsers for Android and iOS do not readily have access to suitable web3 upgrades like extensions and plugins. In a conversation with Cointelegraph, Benjamin Cheng, a senior executive at algorithmic stablecoin issuer Timvi, highlighted the need for easier-to-use DApps. According to Cheng:

“Users deal with technology issues such as waiting for transaction processing, chain reorganization, etc. Blockchain technologies are at the ‘geek’ stage, still not for the mass user, hopefully, this will change with the advent of Level 2 solutions (Layer 2 solutions). Tools for interacting with blockchain are also not user-friendly. We need people like Steve Jobs to make the technology convenient and easy for the user.”

The user environment for DApps needs to become familiar for everyday people, which means focusing effort on simplifying the UIs of these decentralized apps. DApps cannot achieve scale if their user base consists of a micro-niche dominated only by blockchain and web3 enthusiasts.

The role of DeFi in the future of decentralized apps

DeFi became a major aspect of the DApps’s narrative in 2019. Simply put, DeFi is a decentralized monetary and financial system built on public blockchains. DeFi encompasses lending, payments, DEX and crypto derivatives, among others.

DeFi proponents say the system aims to create easy onramps for the economically disenfranchised and underbanked, for example, to have access to global financial services using censorship-resistant blockchain protocols.

According to Dapp.com’s report, DeFi-focused applications, like lending DApps, experienced significant user growth in 2019. Another excerpt from the Dapp.com report reads:

“Financial services (e.g. lending DApps) have the most impressive user growth in 2019. The number of financial DApp users has increased by 610%, and the transaction volume has increased by 251%.” 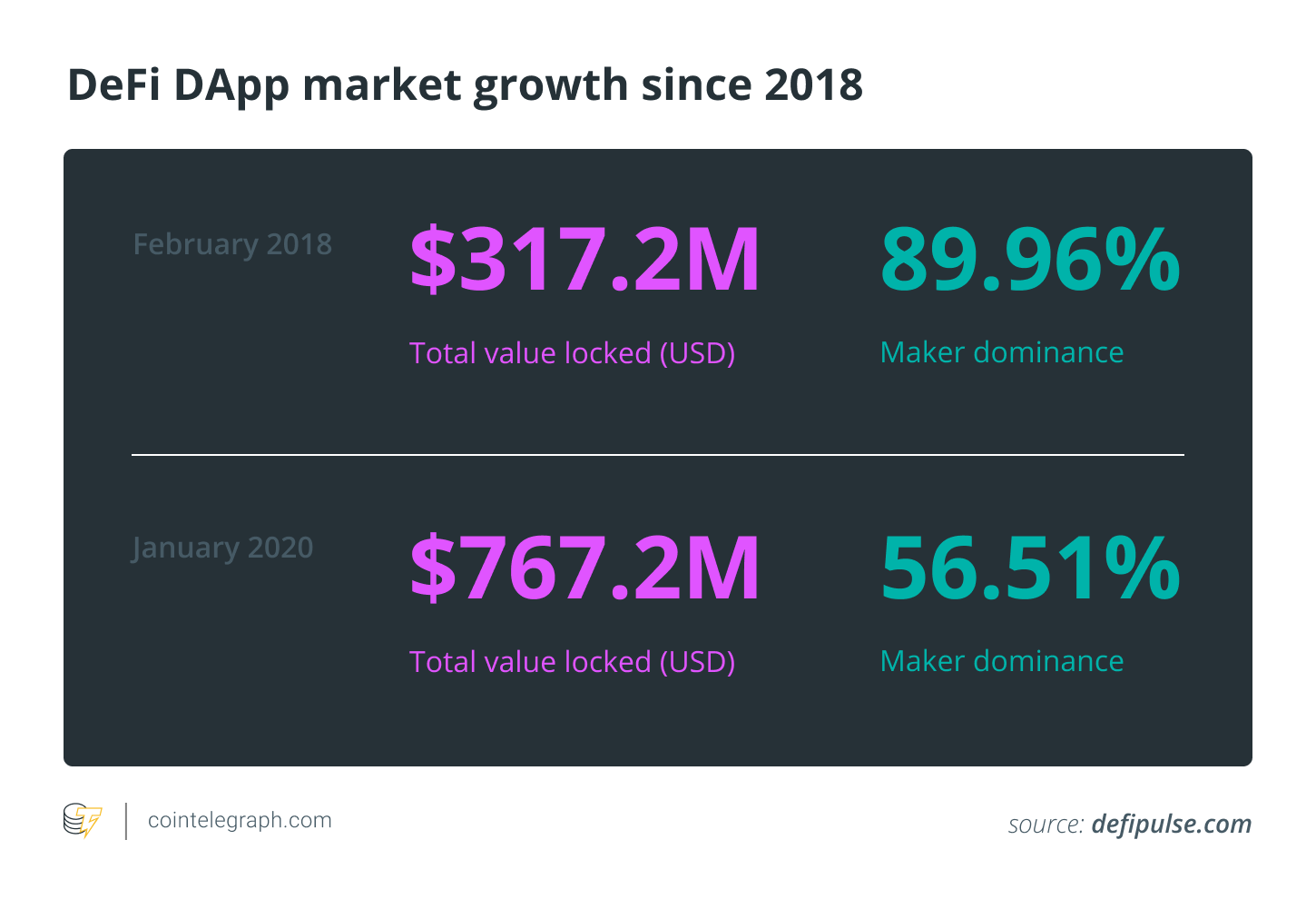 Data from DeFi Pulse, an analytics hub for DeFi-focused DApps, shows a 100% growth in the total value of locked funds within the DeFi market. In a blog post published earlier in January 2020, DeFi identified the expansion of lending markets and the emergence of interoperability as the major growth areas for DeFi in 2020. Schwerin echoed similar sentiments in private correspondence with Cointelegraph. According to him, the DeFi market will make significant strides in 2020, remarking:

“Most definitely, DeFi will be part of making DApps interoperable to exchange the unique values between DApps in a P2P fashion. Automated markets running in the backend, backed by collaterals of the DApps producers.”

For DApp proponents, decentralized app developers should focus efforts on solving usability and interoperability issues, like developing frameworks, that would allow values already existing from previous setups to be imported to a new DApp platform. For Schwerin, such frameworks could even lead to the emergence of “killer DApps” — decentralized apps that gain widespread adoption:

“Using a unique way of interoperable infrastructure in the backend will allow you to swap value and KYC/AML Credentials in the background without having to worry about it. Imagine you set yourself up once and then never have to worry about sign ins/ SSO again.”

According to Schwerin, the existence of such a framework will enable cross-platform transactions, on which, for example, gamers can exchange items in one game for desired items in another game directly from their smartphones. Cross-platform interoperability also creates avenues for further financialization of DApps, especially those not directly related to activities in the financial market.

Commentators like Schwerin say DeFi appears primed to drive the actualization of such goals. The expansion of the DeFi market could see robust payment gateways for a wide variety of DApps. Delivering his 2020 DApp market outlook, Schwerin predicted:

“My forecast would be that we will see the first DApps with large user numbers on Blockstacks or other new blockchains that will then eventually move to Ethereum. These DApps will be mostly gaming related with probably DAUs of up to 100,000 if we are lucky.”

Timvi’s Cheng also tips DeFi to lead the charge for DApps in 2020, predicting a major capital flow into the market. DeFi proponents will be hoping that such inflows will positively impact the scale and scope of the market.