Bolstered by the new coronavirus pandemic, scams continue to be rampant in the cryptocurrency world. From malware to fake investment programs and even fake donations to health organizations, scammers are known for taking advantage of desperate times and desperate people. One of the most prominent scams in the industry, PlusToken, has come under the spotlight again after rumours emerged that the March crash was caused by its operators selling their stolen Bitcoin (BTC).

According to research by Chainalysis, a blockchain analysis company, PlusToken did not cause the “Black Thursday” sell-off of March 12. In a recent webinar, Chainalysis sought to bring clarity to the impact of the COVID-19 pandemic on cryptocurrency markets by analyzing key points in on-chain data such as exchange inflow and more.

During the presentation, Philip Gradwell, the chief economist at Chainalysis, addressed a somewhat common opinion that the crypto market crash that happened March 12 to March 13 was caused by PlusToken liquidating the Bitcoin acquired through its Ponzi scheme, which came to around $2.9 billion, according to Chainalysis. In the webinar, Gradwell stated:

“We can also dispel another theory that has been going around, that PlusToken […] selling triggered the price decline. We actually don’t think that’s the case because PlusToken had largely cashed out before early March.”

According to Chainalysis data, PlusToken movements to exchanges decreased severely before the crash, which indicates funds were already cashed out. A noticeable amount of 12,423 Bitcoin, worth $123 million at the time, was moved to a mixer or cold wallet on Feb. 12, followed by a similar amount in early March. It’s possible that the Bitcoin was cashed out immediately to avoid exchanges freezing funds.

Not the end for PlusToken

PlusToken may still have 61,229 Bitcoin, currently worth around $420 million, according to a report released by OXT Research on March 10. While some Bitcoin has been sold after the crash, low prices seem to discourage those behind PlusToken from selling, if they are still in fact holding such large quantities of Bitcoin. It’s possible that the PlusToken operators may be waiting for the Bitcoin halving to capture a higher price.

According to Chainalysis, volumes prior to and during December 2019 were much higher than those observed in 2020. The accentuated inflows were discussed in another Chainalysis report where it took another stance on the PlusToken and Bitcoin price relation, stating that at the time the sell-offs from PlusToken were keeping Bitcoin prices down.

Although PlusToken has largely cashed out, there is still a chance it will continue to affect Bitcoin. According to Kim Grauer, the head of research at Chainalysis, a large sell-off by PlusToken could bring down the price of Bitcoin in the future, especially if liquidations are executed irresponsibly. She told Cointelegraph:

“We found in the past that large inflows to exchanges, such as those from PlusToken last year, tend to increase the price volatility on exchanges. This problem can potentially be exacerbated by trading bots that pick up on those on-chain movements and execute trades, not to mention the highly leveraged positions on derivatives exchanges that can get liquidated rather quickly. But overall, prices tend to bounce back quickly from those one-off events.”

PlusToken, now known as the biggest cryptocurrency exit scam in history — so far — was a 2019 Ponzi scheme that defrauded investors out of $2.9 billion in cryptocurrency assets by posing as a South Korea-based crypto wallet project that offered depositors interest in crypto, a practice that has become fairly common in decentralized finance applications, centralized banking applications and exchanges offering margin trading.

PlusToken explained that its high interest payments would be generated by exchange profits, mining and referral programs. Shortsighted by the promising gains, over 3 million users registered with PlusToken.The scheme even announced that it expected to grow to 10 million users by the end of 2019, shortly before it exited with depositors’ money.

In China, PlusToken was quickly exposed as a Ponzi scheme when six individuals were arrested by Chinese authorities in June 2019, with reports connecting them to the PlusToken project. Cointelgraph reported on the incident at the time, but it was in August 2019 that the cybersecurity firm CipherTrace released its second quarter Cryptocurrency Anti-Money Laundering Report that confirmed the connection to the PlusToken scam.

COVID-19: Crypto scams on the rise

Interest-generating products have been gaining evermore popularity in the cryptosphere, including MakerDAO’s decentralized protocol, which according to a report by DappRadar saw peak activity during March, and other centralized options such as BlockFi’s banking app or Binance’s lending services. Although crypto has always been prone to illicit activity and shady ventures, the relatively high interest rates practiced in these services may have helped normalize PlusToken’s profit claims, easing unwary investors.

Similar models have been seen elsewhere. In August 2019, a cryptocurrency wallet project from Nigeria called Satowallet allegedly made off with $1 million in a smaller-scale exit scam. Last year, another Ponzi scheme promising returns from cloud mining also made headlines after pulling off a $200 million exit scam that later resulted in 14 individuals being arrested.

An ever-increasing number of “topical” crypto-schemes have surfaced since the worsening of the coronavirus pandemic, from fake donation campaigns for the World Health Organization and the United States Centers for Disease Control and Prevention to fraudsters impersonating officials from these agencies who can sell information on active infections for a price, paid with Bitcoin of course.

Now more than ever, cryptocurrency holders need to be wary of crypto scams. The U.S. Federal Bureau of Investigations recently issued a press release in which it warned of the potential increase of “cryptocurrency-related fraud schemes” during the COVID-19 pandemic, adding:

“There are not only numerous virtual asset service providers online but also thousands of cryptocurrency kiosks located throughout the world which are exploited by criminals to facilitate their schemes. Many traditional financial crimes and money laundering schemes are now orchestrated via cryptocurrencies.”

Although tough times create a perfect chaotic setting for scammers to operate in, it’s relieving to know that despite the increased activity and novel coronavirus-related scams, revenue for crypto scammers fell by around 30% in March. 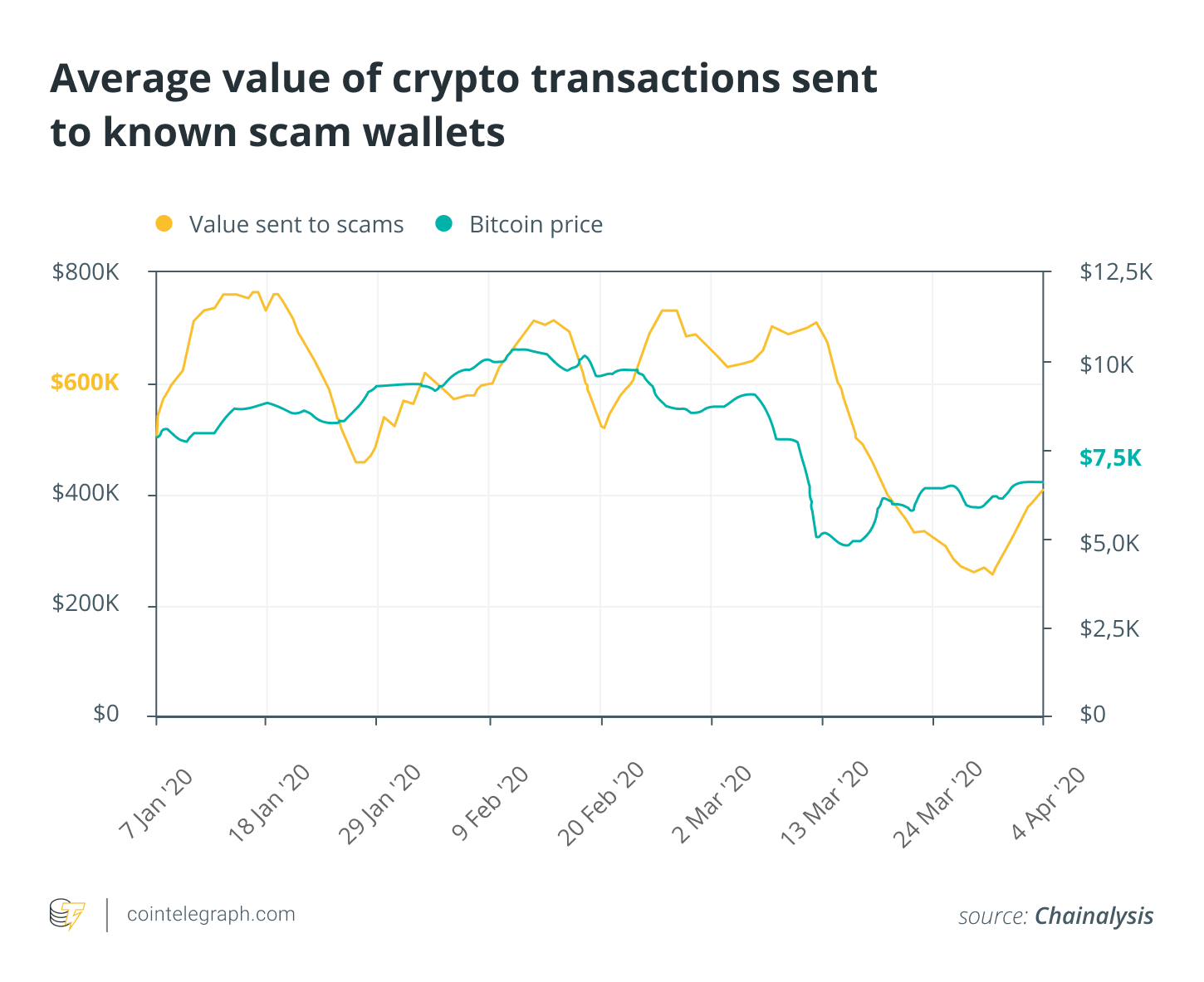 Despite taking on new forms, cryptocurrency scams are almost as old as crypto itself. For example, OneCoin — one of the most prominent names when it comes to cryptocurrency-related scams — was founded in 2014 and it is still making headlines in crypto media. Although OneCoin has been sued, the lead plaintiff for the ongoing $4 billion class-action suit against the project, Donald Berdeaux, has repeatedly failed to meet the court’s monthly status reports, which may lead to the case being dropped.

According to Chainalysis, most of the funds moved by the PlusToken scam were liquidated in two Asian exchanges: Huobi and OKEx. This has raised some concerns about exchanges’ Know Your Customer practices, which do not seem to have been useful when it came to spotting or censoring the transactions from PlusToken.

Although other sources were used, they were small in comparison to the inflows to the aforementioned exchanges. Grauer stated that Chainalysis had “found traces of funds at mining pools, mixers, other scams, and p2p exchanges, but the paths were too small to be interrogated.”

If cryptocurrency schemes are to be stopped, exchanges should ideally act as a final barrier for illicit transactions. Responding to past criticism, Huobi is aiming to improve its security measures by launching Star Atlas, an on-chain monitoring tool that can identify “crimes like fraud, money, laundry and other problematic activities.”

Moreover, Huobi is also looking to partner with data providers like Chainalysis and CryptoCompare to build a more transparent and compliant ecosystem, a measure that will surely be essential for institutionalization and regulatory compliance going forward. Ciara Sun, the vice president of global business at Huobi, told Cointelegraph:

“While we may be able to identify illicit activities once they reach our exchanges and prevent their outflow, we can’t yet prevent illicit transactions that start outside of our platform. However, we believe that collaborative efforts among industry players, including but not limited to information sharing, are the key to success to create a safer friendly ecosystem for the crypto industry to grow.”

While efforts to reduce illicit transactions are being undertaken by exchanges such as Huobi and Paxful, users should always be aware of possible fraud attempts and conduct meaningful diligence into any project they are willing to trust with their coins, as it is unlikely they’ll get them back once lost.